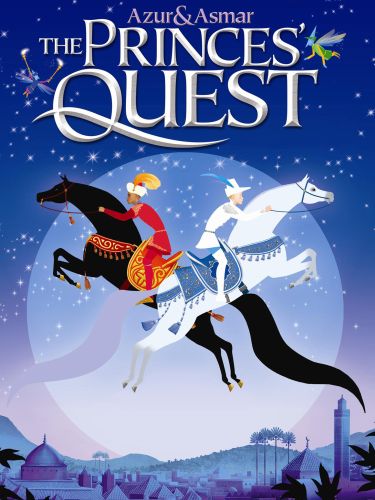 A long time ago, two children were nursed by the same woman. Azur, the blonde-haired, blue-eyed son of a nobleman, and Asmar, the brown-haired, dark-eyed son of the nurse. After being raised like brothers, the children are suddenly torn apart. But Azur, haunted by the story that the nurse used to tell him about the Djinn-fairy, resolves to find her, travelling far and wide on his quest. When they grow up, each of the foster brothers sets off in search of the fairy. Performing one daring feat after another, they discover magical lands full of dangers and marvels...

Michel Ocelot is famous for directing animated tales such as Kirikou and the Sorceress and Princes and Princesses. With Azur and Asmar, he chose to use 3D for the first time, to widespread amazement. He and his team worked for six years to recreate his universe. The result is superb. While it shines with his inimitable style, it also exudes something new thanks to the relief and texture provided by the 3D technique. The artist was keen to get close to the historical and geographical reality so did an enormous amount of research. In order to depict the monuments, lush vegetation and the costumes of the Middles Ages both in the West and the East, he took inspiration from books, contemporary art work (Netherlandish, Turkish, Persian, Andalusian, North African and more), photographs and even journeys to various countries in North Africa, Andalusia and, for eastern villages, the Mediterranean coasts. But that did not stop him from taking liberties elsewhere, especially as religious bans mean there are no images of North Africa from between Antiquity and the 16th century. He wanted to show that places with such heavenly architecture and nature really did exist on Earth. Also, the brightly coloured background plates enhance the aesthetic and are reminiscent of posters from the interwar period. His meticulous graphics are rich with detail and decorative touches. But at the same time they have a poetic simplicity. Thanks to the dreamlike, fabulous quality, we are lured into the story's universe as imagined by the director. Between two civilisations who refuse to get along, individuals recognise each others' worth and respect and love each other "over barbed wire fences". On their initiation quest in search of the Djinn-fairy, the “brothers” travel through magical lands where they encounter fantastic creatures who enchant us with their beauty, including the scarlet lion with the blue claws (dreamt up by the director), the Simurgh (a mythical bird from Persian tales) and Djinns (legendary spirits from Arabic mythology and of which no visual representations have been passed down, leaving the artist to devise his own drawings for the film). The way sound is used is also interesting. The score is by Gabriel Yared, who has Lebanese roots and is a great composer of music for cinema. Here he takes us on a journey thanks to beautiful melodies with Eastern sounds, such as the lullaby sung in Arabic by a woman with a clear and soft voice. The film has dialogue in two languages, French and Arabic, and is not subtitled or dubbed: it may come as a surprise not to understand certain sentences. But that helps to put us in the shoes of Azur, carrying us on a voyage, discovering a culture that is both unknown to us and charming. So Michel Ocelot has tried new things with this film. A new technique, a new language, a representation of Islamic culture whose richness is not well known to everyone - all this in a story about brotherhood. It is all handled poetically and with images that will amaze the whole family.

Suitable for ages 5 and over, but this subtle film is best appreciated from the ages of 7 or 8.

Kirikou and the wild beasts

Why would a hyena go for a wander in a vegetable garden? What know-how can a village use to escape a potential...

Kirikou and the Sorceress

Small but courageous, the tiny Kirikou is born in a village in West Africa. Even before leaving his mother's...

Kirikou and the men and women

Once again we find Kirikou's grandfather in his blue cave, from where he will tell us more stories about his...

When the town is completely overtaken by darkness, two young people climb across the rooftops to join Teo, a...

It is not always easy to find your place in a family, especially when you have to share it with a brother or sister. The heroes of these films are brothers and sisters in various forms - wolf cubs, twins, Buddhists or sea divinities -, but they tackle challenges and plot together, supporting each other and helping each other grow. The six films in this course are poetic, moving, funny and musical, and they introduce you to very different sets of siblings who are, nonetheless, all linked by the same deep love and shared understandings.