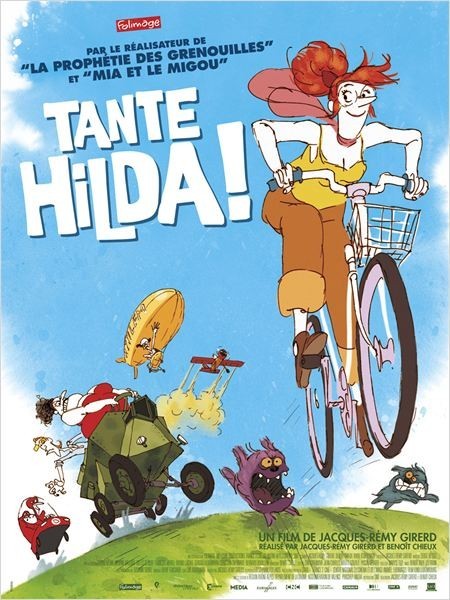 Review by Laetitia Scherier
The divine comedy Adventure all the way

Aunt Hilda is a committed lover of nature and does her utmost to preserve it. Her fondest wish is to spend quality time with her parents in their incredible garden abounding with flowers, which she loves as if they are her own children. But soon even their huge greenhouse will not be enough to protect them from the lurking ecological threat. Attilem, a new cereal that grows with virtually no water and spreads like wild fire, has appeared in the country. While everyone else seems to view it as the solution to world hunger, Hilda tries to warn of the danger …

After “Raining cats and frogs" and "Mia and the Migoo", Jacques-Rémy Girerd continues addressing ecological issues while entertaining us all! But while "Aunt Hilda!" certainly raises the question of genetic modification and the preservation of nature, the directors treat us first of all to an off-beat comedy. The characters are deliberately drawn as caricatures and encourage the viewer to have fun with stereotypes: the eccentric environmental warrior botanist, the Russian scientist, the greedy manufacturing tycoon and the corrupt politician. The film presents us two diametrically opposed visions of the world but clearly takes the side of organic agriculture, highlighting the harmful effects of GM crops. This ecological tale also points the finger at the primacy given by multinationals to profit over public health and the protection of our ecosystem. However, the story is not moralistic or defeatist, it is simply meant to call for care and provoke thought. The film's highly original graphics give it a dream-like aesthetic. The characters seems to float in the middle of all these sublime colours, as if they come from another era. The drawings were done by hand to keep the spontaneity of the features and were then coloured in by computer to give a watercolour appearance. The bold score by Serge Besset – who also did the scores for "Raining cats and frogs, Mia and the Migoo and A Cat in Paris" – is blended with symphonic music, contemporary electroacoustics and 1970s rock, immersing the film in a timeless atmosphere. "Aunt Hilda!" is a skilful mixture of intelligence, beauty and tenderness, which make it recommended viewing for the whole family.

We recommend this film for children aged 7-8 and above. Young kids will enjoy the comedy aspects and colourful characters, while older viewers will grasp the bigger picture addressed by this ambitious film. Aunt Hilda! Is an animated film that, like so many others, is not just for children!

The story is set in medieval Japan (the Muromachi period). Ashitaka, the prince of the Emishis tribe, is...

In 1870, Napoleon III orders Franklin, a renowned scientist, to make an invincibility serum so that he can win...

Wall-E (Waste Allocation Load Lifter Earth-Class) is all but alone on Earth, with only a cockroach for...

Benshi takes you on a voyage of exploration of imaginary worlds, where you can meet colourful characters with endlessly creative minds, people who invent worlds of fantasy or marvels and other who strive to build entirely new horizons... This course is for young cinema lovers aged 5 and over who like adventures and extraordinary stories.