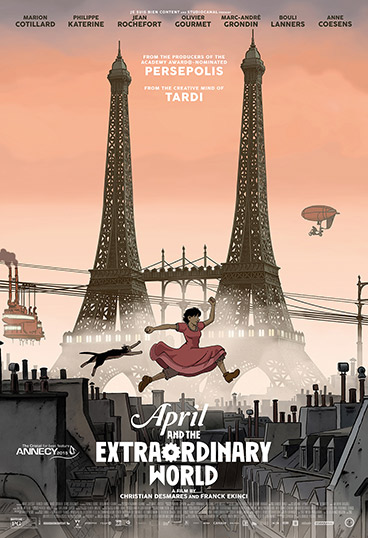 In 1870, Napoleon III orders Franklin, a renowned scientist, to make an invincibility serum so that he can win the war that he is about to wage against Prussia. But the experiment, which is conducted on Komodo dragons, goes wrong and the laboratory is blown up, killing both the scientist and the emperor. The course of history is completely altered, as the Franco-Prussian war never happens and all of the world's greatest scientists start to disappear mysteriously. Deprived of these brilliant minds, the world enters an age without scientific advances. There are no great inventions, the age of coal and steam drags on and nations go to war over wood, the only energy resource. It is a grey and polluted world where only three trees are left on the entire planet. In 1941, the Franklins go into hiding so that they can continue their ancestor's scientific research in secret. Just as they are on the verge of a breakthrough, Inspector Pizoni stumbles upon them.

April and the Extraordinary World is a great adventure film! All the ingredients are here: action, love, humour, suspense, constant visual discoveries, bright and juicy dialogue and an exhilarating rhythm. The first thing that strikes viewers is that it is set in an unbelievably rich visual world - that of Jacques Tardi. We see his love for industrial Paris, the early 20th century and, like Jules Verne, for the most far-out machines and technological inventions. The lines, shapes and dull colours are taken straight from Tardi. With mad inventors, a story of love and family and adventures in a dark Paris, it is as if we are plunged into one of Tardi's graphic novels, except this is not one. The script is bright, intelligent and funny, awash with hilarious discoveries and details. We track, at breathtaking speed, the adventures of April and her talking cat Darwin (to whom the inimitable voice of Phillipe Katerine gives incredible depth and humour). We never know where the story is going to take us but we love the ride. The feeling of constant surprise is a real treat! The story makes us think about scientific progress and the way people misuse it and also about the ecological situation and the role of nature, but the tone is, above all, a celebration of free thought and full of humour. It takes us into us a tender and amusing alternate world, a marvel of the cinema!

This adventure will captivate children from ages 7 and over. Their parents will be tickled by the humour and the alternate world's subverted historical and social references.

Benshi takes you on a voyage of exploration of imaginary worlds, where you can meet colourful characters with endlessly creative minds, people who invent worlds of fantasy or marvels and other who strive to build entirely new horizons... This course is for young cinema lovers aged 5 and over who like adventures and extraordinary stories.