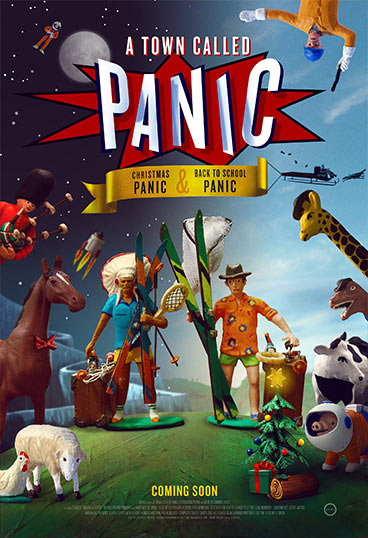 Review by Mégane Bouron
The divine comedy Adventure all the way

Cowboy and Indian are clumsy. To celebrate the birthday of their friend Horse, they decide to get a kit for making a barbecue. But instead of ordering the right amount of bricks, they end up with a billion of the things/ of them?. So begins a disaster in the village...

A lovely tribute to the stop motion technique, A Town called Panic is a highly creative animated film. With its daring, off-beat universe, this feature film is a perfect vehicle for immersing yourself in your childhood. Because who amongst us can say we have never invented incredible stories while playing with plastic figurines? For more than an hour the directors of the magnificent Ernest and Celestine (2012) mould our imagination and guide our dreams as we follow the pulsating adventure of these three wacky characters. With a sure and gentle hand the filmmakers present the wild exploits of Cowboy, Indian and Horse, three goofy and hilarious anti-heroes. The incredible strength of this film resides both in the way it is directed and in its narration. It is intriguing to see the effect of this work, which was made exclusively with simple childhood figurines. Made using the stop motion technique, A Town called Panic succeeds in finding a daring way to captivate viewers for the whole duration of a feature film. Shot sequences play out dynamically and without limitations. We are entranced by the wonderful aesthetics of this zany, irresistibly Belgian universe. This extraordinary work was built around the main characters. There is something special in the relationship between Cowboy and Indian, who we are led to imagine as a pair of eternal rivals who have more in common with each other than they would like to admit. Here these heroes of the wild West hook up and make each other's clumsiness complete. Horse, meanwhile, has his own well defined personality, moved by genuine feelings of love. With its frivolous dialogue and sarcastic humour, A Town called Panic could be compared to the multiple award-winning short film, Logorama by Ludovic Houplain, François Alaux and Hervé de Crécy. These two films, each in their own way, are brilliantly original and offer innovative visions of films aimed at young viewers.

From age 6. A Town called Panic is an audacious and surprising animated feature film recommended for viewers aged 6 and over. However, the slightly rural dialogue can at times be difficult to understand (because of the Belgian accent), so very young viewers may occasionally struggle to grasp what is being said. But the whole family will be wowed by the incredible technique used to make the film, and the exceptional universe depicted.