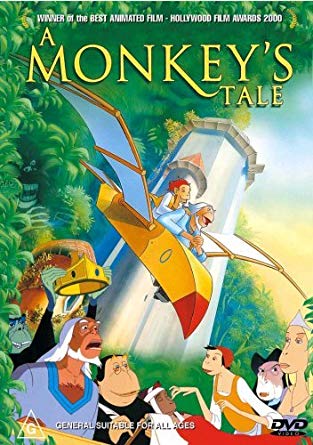 Back at the dawn of time, all monkeys lived together in the savannah, happy and free... Following a terrible disaster, some alarmed primates climbed up to the forest canopy and stayed there. The others set up home below, in the depths of the forest. Time passed. The two tribes, the Woonkos and the Laankos, live on, each totally unaware of what the other one was up to but continuing to cling to prejudices about each other. One day, a young monkey from the tree-top tribe falls all the way down into the depths of the forest...

In this simple and bright coming-of-age story, an intrepid and impertinent young monkey named Kom breaks away from his peers by taking a leap into the unknown. His fall into the abyss of the forest is so dizzying that one would think he has plunged to the centre of the earth... There is nothing like a journey far from home for meeting otherness. Taken in by the King of the Laankos, Kom meets Master Martin, a wise monkey who is amused by this little savage to whom he listens absent-mindedly while taking notes. Martin is so focused on his books that he is impervious to everything going on around him. But he is not as obtuse as the Kom's teacher back with the Woonkos, whose lessons can be summed up by this profound statement: "Everything that is high up is good, and everything at the bottom is bad! " Down below, Kom discovers a people whose hierarchical and codified social structure is very different to the one where he came from. In the king's court, he entertains the gallery as a jester but quickly tires of playing the fool. But in order to get back to his own people he must solve a tangled web of intrigue in the palace, confront spicy baddies who are devising sinister plots (such as the chancellor, for whom John Hurt provides the English voice over), save a poisoned princess and, last but not least, build a bridge between two peoples who could learn to know each other. Trapped in cages of prejudice, the Woonkos and Laankos live in partitioned areas. The superb set highlight their awkward meeting. From the top of the trees, the forest's neither regions seems like an impenetrable world as deep as an abyss, while from the forest's floor, the canopy just looks like a bright muddle of branches. To a free spirit such as Kom, the forest is a wonderful playground. Up top the greenery is lush, the village is perched in trees pierced by light and the monkeys use vines to swing to and fro. Meanwhile down below, there are more features - including the Laankos castle, the vertical way that space is constructed and the joyful and vibrant Kom - that bring to mind the King and the Mockingbird, whose director, Paul Grimault, produced Jean-François Laguione's first three short films.

For age 6 and over

King Charles V + III = VIII + VIII = XVI rules over the kingdom of Takicardia. He runs it as a dictatorship...