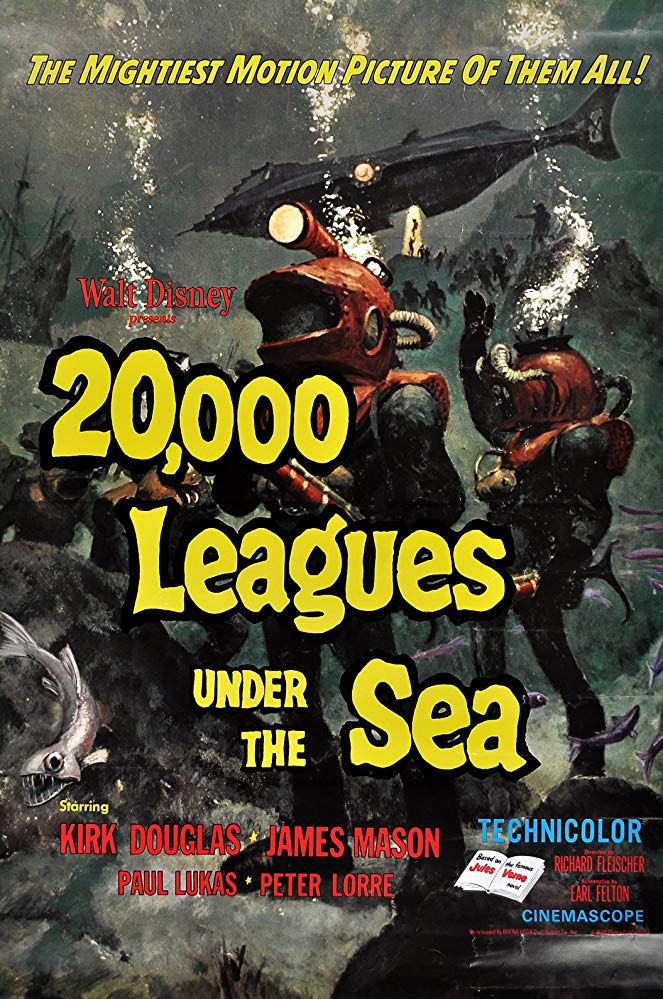 1868, the pacific coast of the United States. Ships are mysteriously perishing on the waves, attacked by what is thought to be an enormous sea monster. The American government dispatches a frigate to catch the infamous creature. On board is Ned Land (Kirk Douglas), a brash blonde hunk and famous master harpooner; Professor Aronnax (Paul Lukas), an elegant scientist who is more at home amid books than on the high seas; and his trusty apprentice Conseil (Peter Lorne). After months of hunting, they have found no trace of the beast. Just as they are about to give up, our three characters bump into what appears to be a monster...

20,000 Leagues Under the Sea is not just a classic for Walt Disney but for the whole history of cinema. Richard Fleischer, son of the famous Max Fleischer, who created Popeye and Betty Boop, was hired to direct his first Walt Disney live action production. Everything about it was an immense challenge. 200 preparatory models were required just to make the Nautilus, the film's magnificent submarine. Disney's head set designer and several teams began preparations for the film 14 months before shooting began. But Walt Disney understood that spectacular action and breathtaking sets are not enough to make a film great. A great script is essential. Based loosely on the novel of the same name by Jules Verne, 20,000 Leagues Under the Sea does not just relate the marine adventures and setbacks of three characters with different aims, it also pits genuine world views against each other in the suspense-filled confines of the Nautilus. What starts out as a war at sea turns into a mind war. In order to avoid the violence of the world, Nemo, the creator and captain of the Nautilus, retreats to the depths of the sea with a pretty female sea lion named Esmeralda. He smokes cigars made from seaweed and eats nothing but fish and shellfish. The man has suffered so much that he no longer invests any hope in humans and prefers to ruin individual lives for the sake of what he considers to be a greater good. But the fuel that powers his amazing vessel could be used against humanity if it falls into the wrong hands. The reasonable Professor Aronnax offers little to balance these views. His fascination for Nemo and his inventions blinds him. He is willing to endanger his life to satisfy his curiosity. The scientist is caught between his apprentice Conseil, a harmless looking sailor named Ned Land, and the diabolical captain, and he does not know which to put his faith in. 20,000 Leagues Under the Sea was made in the 1950s but still resonates deeply today. The acting, sets and special effects remain breathtaking. And since it explores ideas of good and evil and how to balance personal freedom with living in society, Richard Fleischer's film is timeless and universal.

For children and adults alike, the film offers a wonderful dive into the deep sea world. It is suitable for children aged 8 and over. Lasting more than two hours, it might not hold the attention of younger kids.

On a stormy night, a ship is wrecked in southern seas. Gulliver is the only survivor and washes up on the...

Jason and the Argonauts

In ancient Greece, Pelias usurps the throne of his half-brother, King Aeson. Jason, still an infant, is the...